First ever conference of research on digital gamescame to finish; 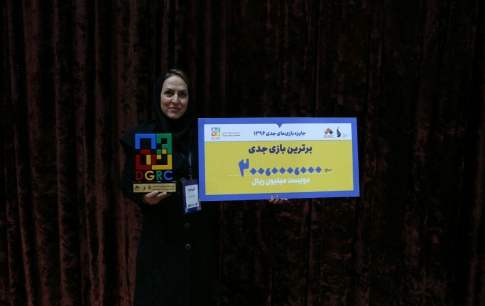 As reported by IRCG, the first conference of research on digital games was held on 23 and 24 November at Iran University of Science and Technology and in the end, the best submitted articles were selected and announced.

At the closing ceremony, CEO of Iran Computer and Video Games Foundation went on stage, expressing his gratitude for this event and the labors of his partners for conducting it in the best way possible: “the research division of Iran Computer and Video Games Foundation began its services about two years ago. During this time, it carried out many activities and services. But its highlight may have been exactly this event”.

Karimi Qodusi went on to explain how four goals and traits has made this conference stand out from the rest and in explaining the first attribute he said: “the first conference of research on digital games in different areas of humanity, technology and artistry, concentrated on being as universal as can be. And if you take into account the amount of diversity in this event, you’ll see how special and distinctive it could prove to be as a research project.”

He elaborated: “the second significant point we can mention in this regard, is that since the beginning, our partners had plans to hold an international conference based on this research, which I think considering how this was the first year of such occasion, the results were quite pleasant. About 155 articles were submitted to the conference and more than fifty percent of those articles were validated to enter the competition and get assessed.”

He also emphasized that the third goal for this conference was “network building” and regarding that, he continued: “Each year, a different university will host this conference. Because of that, the jury for all conferences will be a handpicked group of experts from a variety of universities. This approach, will automatically help us build a network with the top experts in the field and expect bigger, more practical positive progress.”

“Our fourth goal is to form a bond between research and industry, driven from the vision we have at IRCG. We believe that research and study must not stay limited to universities. The practical example of this, was the context of ‘serious games’ in the first conference of research on digital games. It may not have been ideal. But as a first step towards our target, it was acceptable. Because in the end, our office received 55 papers in the related subjects. We are taking the first steps with the ‘serious games’ context and should concentrate on developing more video games with the fitting subject matters, in a way that the user won’t feel they’re experiencing a serious game. It should be after finishing the title that they find out they have learned something” he explained.

Karimi Qodusi finished his talk with this message: “based on all the goals and facts we had in mind and have seen here, we can go on to say this conference deserves praise and I applaud my friends at the research division of Iran Computer and Video Games Foundation for orchestrating such a satisfactory event.”

In the next segment of the event, the best articles by jury decree in the fields of technology, human resources and arts were announced and their researchers were commended for their efforts.

As for the technology and engineering research, the crystal statue went to the article “Mining the Effective Attributes on the Success of Mobile Games Through Methods of Machine Learning” authored by Muhammadreza Muhammadnezhad and Muhammad-Javad Fadaei Islam.

In the area of humanities, the crystal statue for the best article was received by Meghdad Mehrabi for “Gender Differences in Motivations and Gratifications to Play Video Games: The Study of The Sims4 Players”.

And for arts, the award went to Seyyed Noredin Rasuli Maharlui, Shahab Esfandiari and Shiva Moghanlu for “A Study in the Reciprocal effects of Cinema and Video Games from a Visual Aspect”.

As for other departments: the crystal statue for serious games and gamification went to “Maghzineh: A Game-based Approach for Brain Empowerment” penned by Hooman Habib-Nia, Tara Rezapur and Hadi Moradi.

And, “Procedural Content Development in the Video Game Industry” by Morteza Dorri, won the crystal statue for the best poster article.

As the end piece of the event, the best game submitted to the “Serious Games” section was announced at the presence of the jury of this section and Dr. Saljuqi, as the representative of the Ministry of Information and Communications Technology. A video game named “Tarlan” won the top prize for the first ever “best serious game award”, which was 20 million Tomans.