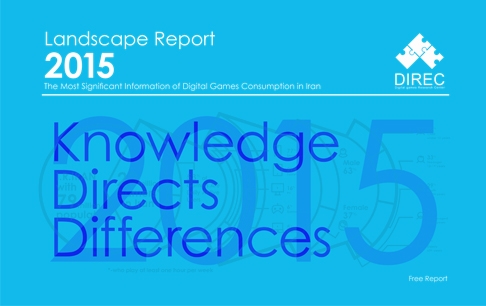 The latest national survey on the use of video games, by the Digital Game Research Center (DIREC) of the Iran Computer and Video Games Foundation, revealed that 23 million of Iranians (approximately15 percent of the whole Iranian population) are used to play computer games regularly. According to this research, 53% of this population said they play games regularly.

In a complete report to be released soon, Iran Computer and Video Games Foundation is going to release the results of “the national survey on the use of video games in Iran,2015”.

According to the statistics, Iranian gamers are more interested in smartphone platforms than other kinds of platforms, so that 77 percent of Iran's 23 million players play with smart phone. Low-visited, laptop and game console to game, have been welcomed by only 5 and 6 percent of the population.

While the stereotype is that video games are for boys, apparently smartphone penetration and mobile gaming disrupted the equation so that 37 percent of Iranian players are female. Also in terms of age, adolescents 12 to 19 years old make up the largest population of Iranian players and with33% of the population are the leading player in Iran. Then, are the young between 20 to 34 years old and the last group are the Iranian children. Thus, it seems that, Video games in Iran are unexpectedly a recreation for youth and adolescents instead of childish entertainment.

Another interesting result of this research is that only one percent of this population (230 thousand people) is players over 60 years old. Therefore, mobile games and video entertainment can be defined independent of the age criteria.

The complete and detailed results would soon to be released.

1/1 ErrorException in Filesystem.php line 75: file_put_contents(): Only 0 of 341 bytes written, possibly out of free disk space