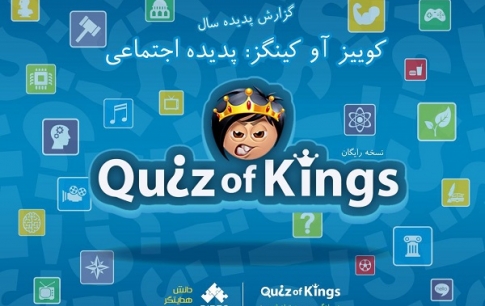 This year, in the series of reports called Yearly Phenomenon which are conducted annually, dedicated to reviewing one hugely popular and successful game in the Iranian market, “Quiz of Kings” took the spot. Interestingly, the first Yearly report revolved around Clash of Clans, but this year, one local IP garnered enough attention to defeat all others to the top.

Quiz of Kings, is a social educational/ trivial/ competitive game based on general information that puts players in a question-based contest. It hit a usage growth spurt of 1683 percent in year 2017 and went on to establish one of the biggest user bases in the Iranian video games history. Besides the fact that this product was met with a huge positive reaction from the Iranian players, its efficiency in managing the social interactions of the users, which could prove challenging for such a game, and the developers’ openness to criticisms targeted at the initial repetitiveness and basicness of the game and their efforts in correction and renovation were all contributing factors to it being chosen as this year’s Yearly Phenomenon. The developers took a basic trivia-based platform and continued to establish and retain an active connection with users and actually involve them in the content creation process, which is an essential pillar of such genre. This continual effort in user attraction and retention helped Quiz of Kings to secure a firm foothold in the Iranian mobile market and become a financial success.

Dictated by the methodology of the report, in its free version, the analysis only weighs down on some basic indicators inside the game. The developers, kindly made it possible to access the basic data of those indicators through the statistical and analytical platform of the game and the results were confirmed by them. The study period started from the beginning of the 4th quarter of 2015 (Mehr of 1394 SH) and lasted until the end of the 4th quarter of 2017 (Azar of 1396 SH). To make easier the studying of the results, the time period was divided into seasonal sections, realized in chart form, and the average scale for each section was mentioned. Even though the game was introduced to the market some time before the 4th quarter of 2015, it was actually at this date that it really began its introduction to users and based on that, we may consider the fall of 2014 to the fall of 2016 the first year of Quiz of Kings in the market. Unfortunately, regarding the daily, weekly and monthly data, it wasn’t possible to access the results of the first few months and so, in these categories, the available information starts with the spring of 2016. It must be mentioned that choosing the end of the 4th quarter of 2017 as the closing date, was done to cover the first two years after the release. Because of this, the 1st quarter of 2018 isn’t factored in. In order to make reading as simple as possible, effort was made to exclude decimals and round as many numbers as possible. In cases that two numbers were too close it was decided to zoom in on the difference with up to two decimals.

Important numbers of this report: