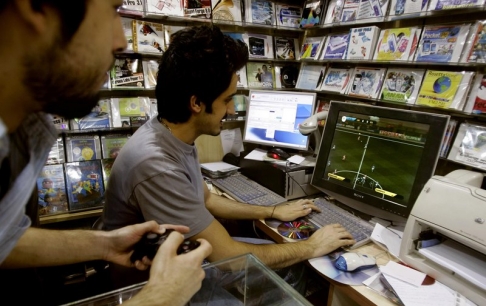 Though Iranian-made video games with incendiary anti-Israel gameplay like Missile Strike and Attack on Tel-Aviv are the ones that grab international headlines, Polygon’s Yara Elmjouie writes that they’re not representative of the country’s fledgling gaming industry. Despite international sanctions against the country, as well as harsh restrictions levied by Iran's own government, video gaming is becoming a big business.

"Markets like Iran are filled with some of the most hard-core gamers the world's ever seen," Iranian-born game developer Amir-Esmaeil Bozorgzadeh tells Deborah Amos for NPR.

Iranian game designers often draw from their country’s rich culture of storytelling and mythology to inform their own games. Bozorgzadeh’s online multiplayer game in the works, Seven Quests, is based on the “Shahnameh: The Persian Book of Kings,” an epic poem from ancient Persia that tells the story of the hero Rostam, a Hercules-like figure, Amos reports. Similarly, one of the most popular Iranian video games is 2010’s Garshasp: The Monster Slayer, which has been compared to the God of War franchise, but with a storyline drawing from Persian mythology instead of ancient Greece, Elmjouie writes.

The game is so popular in the country that as one Iranian game designer put it, "If you haven’t heard of Garshasp, then you don’t know anything about the Iranian video game industry," Elmjouie reports.

Today, an Iranian NGO called the Iran Computer and Video Games Foundation—whose goal is to foster fledgling video game developers by providing funds and helping them navigate the restrictions set by government censors—bosts that the country is the "largest growing video games market in [the] Middle East."

Despite the relative success of its own games though, one of the biggest challenges for Iranian developers remains the competition with pirated versions of Western-made games – games that are often more technically refined, but cost about the same as an Iranian-made game.

"When you have two products, one of them a triple-A international title developed by 200 people in which millions of dollars have been spent, and the other an Iranian game developed by 15 people...but their prices are similar, this makes for unfair competition," Iran Computer and Video Games Foundation's production deputy Mehrdad Ashtiani tells Elmjouie.

The struggle doesn't stop at computer and console games: as Bozorgzadeh writes for TechCrunch, the Iranian mobile gaming industry lags behind its neighbors for a share of the lucrative market. Last year, Iranian-made mobile games only made about $39 million by a generous estimate— a fraction of the revenue made by mobile game companies in neighboring Turkey.

The Iranian video game industry might soon get a breath of fresh air. Last weekend, American and European officials lifted some of the harshest economic sanctions levied against Iran after the United Nation's nuclear watchdog group verified that the Iranian government did comply with the terms of the nuclear deal. With a little economic breathing room on the horizon, Iran might soon be opened up for more investment from tech companies and video game publishers – and with local game developers thirsty for a shot to make their mark, gamers might start seeing more Iranian video games on the market soon.