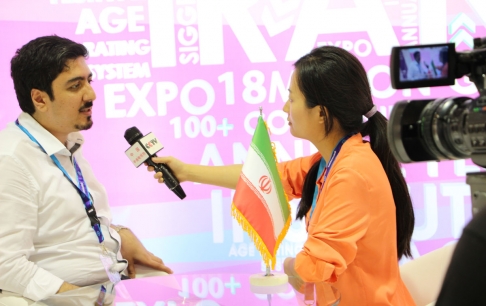 CCTV-The landmark deal aimed at reining in Iran's nuclear program and reached on July 14 has helped the country's video game trades in the world.

At the 2015 Gamescom which took place from Aug. 5 to Aug. 9 in Cologne in Germany, Iran's video game exhibitors posted "Hello World" at the expo booth to promote the communication with the game developers from other countries in the world. This was the sixth time but a significant one for Iran to participate in the video game expo.

"Having the sanction, we couldn't really have the ability to transfer money to other countries or transfer it back to our country. That was the first problem. The second was that Iranian game developers couldn't really connect with other game developers because as for the mutual cooperation, when we are talking with other companies or other countries, they will say 'oh, hold on, you are under sanctions, I can't do business with you'," said Hasan Karimi, chairman of the Iran computer and video game foundation.

Karimi said some Iranian video game companies have negotiated with other countries' companies at this expo, and believed the situation will get better and better in the future.

"We have institutes in Iran named Iran Game Development Institute with 200 game students. Currently they are educated in our institute. We are trying to find opportunity with other institutes and game academy and game universities to have mutual courses together. We want to send our best students abroad to different countries," said Karimi.

Karimi welcomed other overseas video game companies to participate in the annual game expo in Teheran.