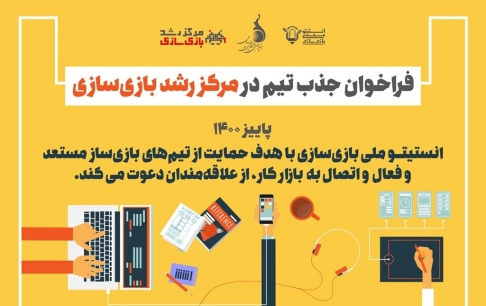 Due to this support, the National Gaming Institute has announced that it will deploy interested and capable individuals and teams in the field of gaming in order to develop this center and connect talented teams to the gaming industry.

This call has been published with the aim of developing the Game Development Center, empowering game developers, and connecting talented and skilled teams to the game industry.

In this call, we try to provide the conditions for the participation of volunteers from all over the country in the growth center of game development with a new look at attracting game developers.

The most important support services of the National  Computer Games Foundation for developer teams are:

3. Support for receiving booths in exhibitions held by the Foundation or other events related to the gaming industry approved by the Growth Center

5. Possibility of communication with specialized investors in the field of game development and introduction of produced games to this network

6. Provide conditions for receiving economic projects from game industry activists to be handed over to technology teams based in the growth center (MarkazeRoshd)

7. Guidance on the establishment of the company to the technology units located in the center and the entry of these companies into the ecosystems of knowledge-based and creative companies

9. Possibility of establishing cultural institutions by technology units located in the center if the required conditions are met

Expert and capable can apply individually to attend the growth center (MarkazeRoshd).

These individuals will become members of one of teams by completing personal information and sending a resume to the e-mail specified in the application form, after negotiating and evaluating the core of mentoring.

The process of deploying a team to the post-growth stage  is shown in the image below:

For more information and to submit a request form, visit here; you can also read more about the details of The Growth Center of Game Development here.