In order to prepare the participants for Hackathon 2021; 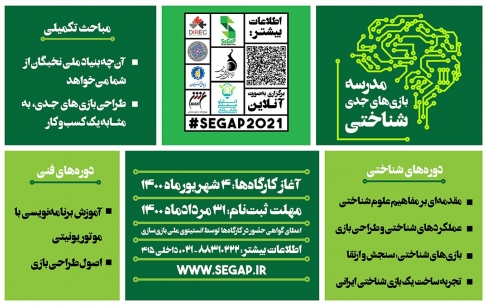 According to the public relations of the National Computer Games Foundation, the fifth round of the Serious Games Award which is an important step in inviting people to enroll in the school [being prepared by the Secretariat] will be held online. As previously announced in the initial call for the 2021 Serious Games Award, Hackathon with the support of the Cognitive Science and Technology Development Headquarters [Cash and facilities supports] and the "Empowerment and Talent Acquisition with a Cognitive Approach" theme will be held.

In addition, the National Elite Foundation, accredit the hackathon in the “Shahid Babaei” project, will grant elite activity points to its eligible candidates, and participants can take advantage of this opportunity.

In addition to these two, the Digital Economy and Intelligence Technologies Development Headquarters also sponsors Hackathon, and these three together will award more than 100 million Tomans in cash prizes, as well as various commercialization facilities for the winners.

A school to qualify for serious cognitive games

The major difference between this course and previous ones is “serious cognitive game school” to empower Hackathon participants online.

The school seeks to train hackathon participants for a prototype of a cognitive game by reviewing the basics, technical and cognitive principles of building a serious cognitive game.

.It is worth mention that participation in these workshops is prerequisite to attending Hackathon in order to use the privilege of elite activity.

The courses offered by the school will be held in three sections: technical courses, cognitive courses and supplementary topics as follows:

How to enroll in school and hackathon?

It is possible to register in the workshops of this school both individually and as a team. However, the presence of at least one of the team members in all workshops is mandatory.

If you want to participate only in the training workshops, you do not need fill Hackathon’s registration form, thus to get the direct link to participate in the workshops, call 021- 88310222(415) or connect via our email address: SERIOUS.GAMES.PRIZE@GMAIL.COM

The registration fee for attending the school individually or as a team in total is 1,000,000 Rials, and those interested could register until end of August 2021 in workshops. The workshops will start on the 4th of September and on Thursday and Friday. The exact time of the workshops will be announced later.

1/1 ErrorException in Filesystem.php line 75: file_put_contents(): Only 0 of 320 bytes written, possibly out of free disk space