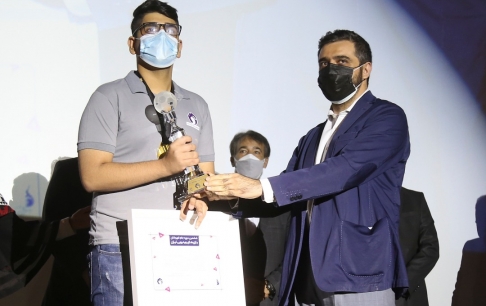 For the first time this event was held online due to the pandemic in the country. Players competed on June 20 - 21 in Mellat Cineplex (number 9, 10 cinema halls) with a limited number of audiences due to the lockdown conditions. In other words, holding a video game league in the cinema hall led to a different and exciting experience for the audience who are used to watch movies on the silver screen of the cinema.

This year the final competition of the Iranian Video Game Champions Cup was held between Seyed Mohammad Mehrab Jafari (19 year old) and Alireza Dosti (18 year old), which ended in a 3: 2, therefore Alireza Dousti won the championship of FIFA 21. With this victory, he won a gold medal, received a prize of 350 million Rials, and the audience gave a big round of applause. Seyed Mohammad Mehrab Jafari won the prize of 250 million Rials for second place and Mehran Alizadeh, (Nima Sadeghi’s opponent), won third place due to Sadeghi's absence in semi-final game and won the prize of 150 million Rials.

Iranian made a history in  FIFA International Competitions

The sixth Iranian Video Game Champion Cup had another special section, which was held for the first time in the history of this event: “FIFA International Tournament” indeed a competition between best players from Iran, Sweden, Russia, Uzbekistan, and Turkey. In this field, which was held online from 11:00 AM on Friday and reported by Davood Rafiei, Robert Fakhreddinov from Russia won the first prize of $ 1,500, Ismail Can Yerinde from Turkey won the prize of $ 1,000 and Pouyan Rahimi from Iran won the third place and the prize of $ 500. Rising star of sixth video game champion cup was Pouyan Rahimi, who, defeated famous Swedish star “Boraseljand”.

The prize giving and closing ceremony of the 6th Iranian Video Game Champion Cup in presence of  Seyed Sadegh Pejman, CEO of the National Computer Games Foundation, Mostafa Ahmadi, CEO of Aparat Game, Hashem Mirzakhani, Director of Tasvire Shahr Institute and the foundation's vice and managers was performed by Mohammad Javad Solouki . The winners of three mobile games at this event; Clash Royale, Bazan Bahador and Footballistars, were also announced and received their prizes.

Younes Nasehi won the first prize for Bezan Bahador mobile game and received plaque, medal, championship cup and a prize of 200 million Rials. Not too far behind him, Ali Zarkash in second place was awarded 100 million Rials and Mohammad Azizi won 50 million Rials for third place.

1/1 ErrorException in Filesystem.php line 75: file_put_contents(): Only 0 of 342 bytes written, possibly out of free disk space