How do the people of Tehran play? 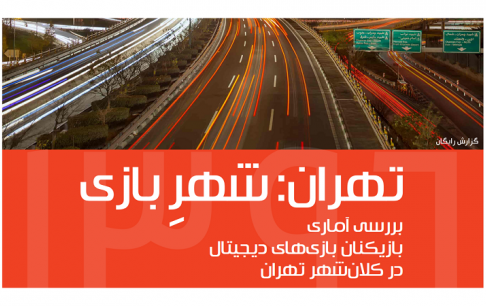 In this report; divided in two main categories; we’ll read about “how the people of Tehran play” and “how do they but video games”.

The statistics demonstrate that 90 percent of Tehranian gamers have access to the Internet, but only about 60 percent of this statistical population play video games online. If we break it down, we’ll see that 53 percent of these users connect to the Internet through their mobile SIM cards, 33 percent through ADSL, 6 percent use WiMAX connections and only about 1 percent still use Dial-Up. This goes to show that most of the online players in Tehran use mobile games as a pastime and prefer to play online on this platform also.

26 percent of Tehranian gamers, are costumers

The share of different means of obtaining video games, when compared, shows that about 87 percent (the larger sum of) Tehranian gamers prefer the “order online, receive online” method to the other means. “Physical visits to buy physical copies” with 78 percent welcome, comes in second in the list of ways to shop for games in Tehran, and finally, the “order online, receive in person” model sits in the third place with only 14 percent of costumers willing to opt for.

This goes to prove that the first shopping medium, which means downloading games through the Internet and using it, is the better, more accessible way of obtaining video games in Tehran. The second method actually refers to visiting a store in person and buying the physical product you have in mind. Surely, the third method describes buying physical copies through the Internet.

However, the statistics show that only about 26 percent of Tehranians are costumers who spend money on video games. Out of this 26 percent, about 89 percent are male and 11 percent are female costumers; the average age of whom is 18.

Through division of Tehran into different sections, we were informed that most of the video game costumers in the city are situated in the western part of the city, which makes 36 percent of the whole. After that, we have the central Tehran with 28 percent, north and south of Tehran with 25 percent combined, and the eastern Tehran takes up the remaining 21 percent.

The highest rate of male costumers is seen in the central Tehran, with 95 percent. Then, we have southern Tehran with 94 percent male population, eastern Tehran with 86 percent and the west and north districts with 84 percent combined. The highest rate of female costumers can be seen in the northern and western districts, which make up to 16 percent of all costumers in these areas. As for the eastern, southern and central Tehran, the share are 14, 6 and 5 percent respectively.

The average age of the costumers in these five districts are 20, 19, 18 and 16. For the west district, it’s 20. For the central district it’s 19. As for the two districts of east and north the average is 18, and finally, 16 years old for the south of Tehran.

The most earnings are from sale of video game consoles

The earnings from sale of digital games and the related hardware in Tehran is estimated to be around 275 Billion and 300 million Tomans. More careful studies show the ways this revenue has been built. The lion’s share of the profits comes from selling video game related hardware which amounts to 65 percent of all earnings in Tehran. If we again zoom in on this 65 percent, we’ll arrive at two categories of home consoles and accessories (including game controllers, cell phones, tablets and personal computer pieces) which take up 57 and 8 percent of the shares respectively. 16 percent of these earnings come from selling console games and 15 percent is driven by sale of mobile games. Only 4 percent of this revenue is made from PC games.

This discrepancy in sales figures may well be due to the fact that the mobile gamers use only original games, but the bigger chunk of the PC market in Tehran is occupied by cheap pirated copies of video games.

As a whole, these statistics show that when the number of facilities, developers and even gamers are compared, we arrive at astronomical differences between Tehran and other regions of Iran. The East district of Tehran by itself, has many more players than many other cities of Iran.

It should be noted that the age average of Tehranian gamers, and the numbers of console gamers and online gamers are also higher than the other parts of Iran. Add to that fact that in Tehran, the share of access to online games is higher than the physical access. It all goes to show that the metropolitan city of Tehran is serving as the lifeline of transitions in the ecosystem of digital games in the country and can serve well as a role model to the whole scope and policies of the country’s video game industry.