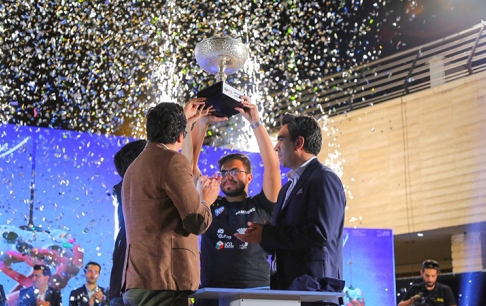 The champions of the fourth Iran Game League, which began on Tuesday August 28 and ended Friday September 7, were announced on the final night of the competition. This year, the number of participants saw a whopping increase of 70 percent compared to last, which means more than 12 thousand people took part in it. In the fourth Iran Game League, more than 20 thousand plays were made and since this time the ladies were able to participate, more than 2000 women entered the competition.

The fourth Iran Game League’s sports were games like PES2018 and FIFA18 on Xbox3360, PS4 and PC, Clash Royale as the foreign mobile game, Counter-Strike for the group-competition, with Godson (Pesarkhandeh) and Quiz of Kings as the Iranian mobile game sports. Since the current Iranian year is the “Year of Supporting Domestic Product”, a bold emphasis was put on Iranian games for the fourth round of IGL. Quiz of Kings and Godson, are both entirely domestic products, with the first title experiencing its second year at the Iran Game League and the second title having entering the competition for the first time ever. In the fourth IGL, Iranian games were able to attract more than 5 thousand participants, with Quiz of Kings being the most popular.

Top of the Tops in the Fourth Iran Game League

In this year’s IGL, the championship title for Clash Royale went to Muhammad-Javad Seyfi and Mohsen Gandomkar took home the prize for Godson. As for Counter-Strike, the final competition was held between VivA and SinisteR teams, through which, VivA successfully beat the other 27 teams to the punch and became the champion.

The fate of the best contestants in sports of Quiz of Kings, FIFA18 and PES2018 intertwined in the final day of the competition and announcement ceremony for the winners, with Mazdak Mirzaei, a well-known Iranian presenter hosting the show and Hassan Karimi Qodusi, CEO of Iran Computer and Video Games Foundation attending the show. Out of 8 final contestants of PES2018 – 2 out of the PC and X360 participants, and 6 out of PS4 participants – Danial Asadi and Muhammad Hussein Achrash found their way into the finale. In the end, it was Achrash who defeated his counterpart and became the champion of the PES2018 sport, with Muhammad-Javad Taqavi finishing in the 3rd place.

As for FIFA18, the finale was held between Nima Sadeqi and Muhammad Kamali. In the end, it was Nima Sadeqi who raised the cup above his head. Alireza Bouyeri and Muhammad-Navid Behvand finished 3rd jointly.

Finally, it was time for the finale with the most audience, of the most popular game of the tournament, Quiz of Kings. Mehrshad Afrasiabi and Shahab Muhtashamian were the finalists who rose to the occasion and defeated more than 5000 participants to enter the finale of this sport. In the end, it was Mehrshad Afrasiabi who, through a breathtaking contest, defeated his opponent, Shahab Muhtashamian and take home the champion title of Quiz of Kings. Babak Ramin-nia came 3rd in the contest.