Good news out of the visit of IRCG’s CEO to Black Cube Games: 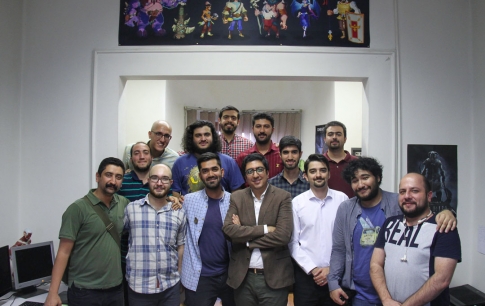 Gamescom came to a close a while back, in which the Tale of Bistun, served as an ambassador of the Iranian video game market. Due to this, Hassan Karimi Qodusi, the CEO of Iran Computer and Video Games foundation, Matin Izadi, its deputy of support, and Ali Fakhar, the PR manager of the foundation made a visit to the Black Cube Games studio to see how their game has progressed. While making the visit, Amin Shahidi, a member of the studio mentioned that the negotiations he and one of the visiting publishers to the TGC 2018 had, was resumed through the Gamescom trade fair, with great results in the end.

It should be noted that as a token of good will and show of support for the domestic video game market and quality products like the Tale of Bistun, all expenses for the game to partake in the Gamescom 2018 were paid by IRCG.

Hassan Karimi commended the Black Cube Studio on their achievements in the Gamescom 2018 and told the team’s members that the Iran Computer and Video Games Foundation will do whatever it can to support BCG and other Iranian video game developers who are successful in the international scene. The Tale of Bistun was met with a warm welcome from many foreign companies and publishers in the Gamescom 2018 and we expect to see this exemplary product find a big international publisher in the coming months.

In order to further strengthen the relationships in the Iranian game industry, Iran Computer and Video Games Foundations has plans to make visits to some video game studios each month.