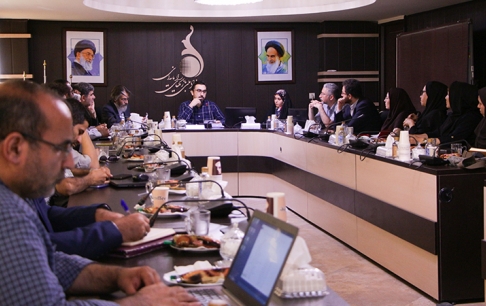 On Tuesday, July 24, the introduction meeting of the members for the second international Digital Games Research Conference was held in the Iran Computer and Video Games Foundation’s building. The conference will be held on November 29 and 30 of the current year.

The deputy director for the research division, went on to introduce the whole panel, citing their academic fields, academic degrees and the types of the universities they represented. According to these information, as of now, there are 51 people in the scientific committee, out of which, 41 are Iranian, 6 are foreigners and 4 are Iranian residents of other countries. 26 of the committee work in the field of humanities, 18 in the engineering field, 4 in fields of arts, and finally 3 are experts in medical sciences.

Out of the 51 members of the committee, 5 are professors, 12 are associate professors, 28 are assistant professors, 7 have doctorates and 2 are currently studying for their doctorate.

Sharifi regarded Professor Mark Griffins as a key speaker of the conference. Professor Griffins has a significant portfolio of a wide range of studies and activities in the field of digital games and addiction to video games.

Another speaker at the panel, Hamed Nasiri, secretary of Serious Games Awards (SeGap), gave the others some information about the said category of the event. Giving some notes about the first round of serious games last year, he mentioned 54 games were submitted to the office of Serious Games, and after reviewing all of them in three aspects of technical (by expert judges of the field), business (in cooperation with accelerator, Avagames) and scientific (with help of judges expert in field of Serious Games), ultimately 5 were chosen as finalists and out of those, one game (educational game called Tarlan) was chosen as the best title. RehabMap and 20 Million also received 5 million Tomans in prizes as the runner ups.

Nasiri then talked about the changes in the Serious Games Awards 2018, and said the judges will be stricter this time around. On top of the perks given last year, this time there will be more dedication and follow-ups on side of the Serious Games regarding the winners. Efforts will be made to really develop the business aspects of the winners and to provide for them multiple opportunities, including taking part in events to find investors. There will also be a 48 hour Serious Game Jam, held one week prior to the conference. The participants will be given a specific theme and subject, and are required to hand in a playable demo in the allocated time.

Finally, Dr. Davoud Nemati Anaraki, the special scientific secretary of this year’s conference and the deputy director of education at Iran Broadcasting University mentioned the partnership between this university and Iran Computer and Video Games Foundation. Anaraki went into detail about the partnership and expressed his satisfaction with the created situation and further emphasized that they have put in their utmost effort to hold the conference in the best possible conditions and will try to sustain their relationship with the foundation.

It should also be noted that the Digital Games Research Conference (DGRC) is the biggest major interdisciplinary conference in the country. It embodies a wide range of research revolving around video games in the four categories of technical, engineering, humanities, arts and medical sciences. This conference is held annually by Iran Computer and Video Games Foundation as the trustee of the government to carry out duties and activities related to video games and supervision over this area, each year in partnership with one esteemed university of the country, active in field of video games. As mentioned, this year, Iran Computer and Video Game Foundation’s partner in holding the conference is Iran Broadcasting University. Also, the permanent secretary of this event is the Digital Games Research Center (DIREC), the institution that is trying to improve the level of research in the field of video games through long-term planning and closing the gap between researchers and the industry.