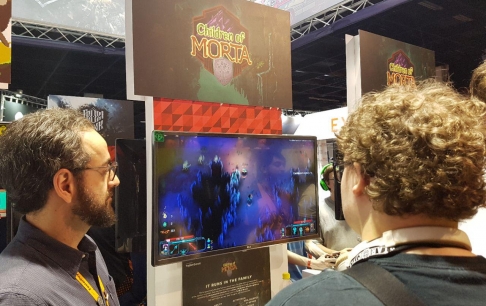 According to Iran Computer and Video Games Foundation, for the first time in Gamescom history, an Iranian video game made its way to the official exhibition. Gamescom 2017, held in Cologne, Germany, welcomed the first Iranian video game to ever have a booth in this world-renown event. Children of Morta is a new IP by Fan Afzaar that has been met with a positive reaction from European youth.

Amirhossein Fasihi, CEO at Fan Afzaar mentioned that it was actually last year when being present at the exhibition, that they formed an agreement with the Polish publisher and continued: “11 Bit Studio as a publisher has experienced considerable success in the international scene and it bodes well for us to have arranged with them to publish our latest game ‘Children of Morta’ at the beginning months of 2018”.

Fasihi further explained that Children of Morta is the story of a family that rises up to defend their land against the attack of the evil forces of Ahriman. The game would be suitable for the ages 12 and above.

The game’s brochure given out at Gamescom reads: “Children of Morta will make you feel like you’re really in a family and that’s what’ll make you spend more time in its world.”

According to the report, this game is one of the few Iranian video games that was greenlighted to participate in the entertainment section of Germany’s Gamescom. The game’s publisher put 4 PCs in its booth for the interested crowd to test the game.

Taking into mind the eye-catching progress of Iranian developers in interacting and forming relationships with publishers and international gaming companies, we can be hopeful to see more Iranian games at Gamescom in the near future.