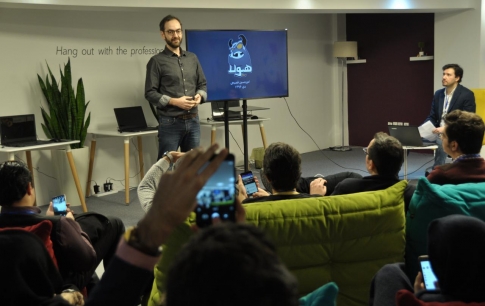 In this meeting, where friendly banters formed between some members of media, developers and socialites that were present, all came to find out and agree upon the values and goals of Hayoola.

Amirhossein Fasihi, the CEO at Fan Afzaar and director of the team behind Hayoola, pointed out that this online shop was actually made to meet their own team’s need for a platform to publish their games digitally and said: “Fan Afzaar is active for more than eleven years now. We’ve produced video games for personal computers and Smartphones and our acquired knowledge of the market shows that contrary to what some may believe, the video games market has not lost its mojo and it’s still really popular among core gamers. The Achilles heel of video games in this market is the absence of a lawful, transparent and efficient platform for Iranian and foreign developers to use in order to share their projects with customers. In Hayoola, we are exactly looking to do away with that problem.”

He continued: “right now there are more than 20 Iranian titles and 3 foreign IPs submitted to this platform, ready to download.” Yaser Zhian, the technical director of Hayoola also described their website as something beyond just a market for users and developers. He said: “currently, technical support, after sales services, updating and spreading information are some of the services we offer to our users. Scoreboards, online gaming and interaction will be further services that we’ll provide in time. What I’m trying to say is that, when a customer buys a video game off of our website, it doesn’t mean that our relationship with them comes to a finish! As for Iranian developers, we have plans. We’re going to get feedback from users, transfer our knowledge and experience and use software kits or SDKs for development purposes.”

The “Hayoola” team also mentioned their efforts in order to localize and publish excellent foreign games in Iran. Kasra Tehrani, manager of commercial development of Hayoola, unveiled the localized version of “This War of Mine”, developed by the Polish studio of Bits11. This is the first ever translated and localized video game with copyright published in Iran. Fasihi mentioned the 4 million sold copies of this game, and explained that more than 88 thousand words were translated for this title: “publishing This War of Mine, an excellent high quality piece of work, goes a long way to show how and what is our approach for lawful publishing of future video games in a competitive manner.”

At the end of the meeting, Amin Amir-sharifi, the CEO of Café Bazaar and a good friend and ally of Fan Afzaar said: “the success of Café Bazaar with app and video game developers has gone to show that building such infrastructures can further increase entrepreneurship and strengthen and empower the industry. Right now Café Bazaar is working with thousands of talented Iranian developers and is doing the same thing, experiencing the same success I mentioned and there’s no doubt that Hayoola too, can push the Iranian PC market to achieve a similar level of success.”