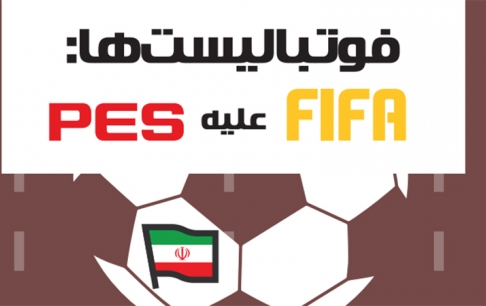 PES and FIFA franchises have a broad range of dedicated fans in Iran. KONAMI and Electronic Arts spend huge resources to get the upper hand in their competition. So much that even their fans are in a constant competition with each other over which is the better franchise! Despite some players actually enjoying both titles, the rest are very serious about their interest in their favorite game and you may expect to see a skirmish of rants anytime two believers in the opposite poles of this field of competition meet each other!

In this infographic, based on the survey by the Digital Games Research Center (DIREC), done throughout the country, with more than 8000 samples in metropolises, cities and towns in the year 1396 (2017), important information is given about the demographic of Iranian players that spend time with these two titles on PC and home consoles.

Relatively speaking, based on the statistics, FIFA is the more successful franchise worldwide and has sold more copies in the recent years. But according to the gathered information, in Iran, PES has had the most success in the year 2017. It should be noted that since there is no copyright law governing Iran’s markets, most of the games that are accessible here, including PES and FIFA franchises, are illegally copied or are acquired through copying their files or illegal downloads. Only a few of the series – FIFA17, FIFA18, PES2017 and PES2018 for XBOX One and PS4 consoles – are bought and sold original and that’s simply because these two consoles can’t get hacked to run copied disks. This is really interesting, because both consoles may get hacked install games and run them without a need for disks.

You may download the said infographic from the link below and study the high quality version.